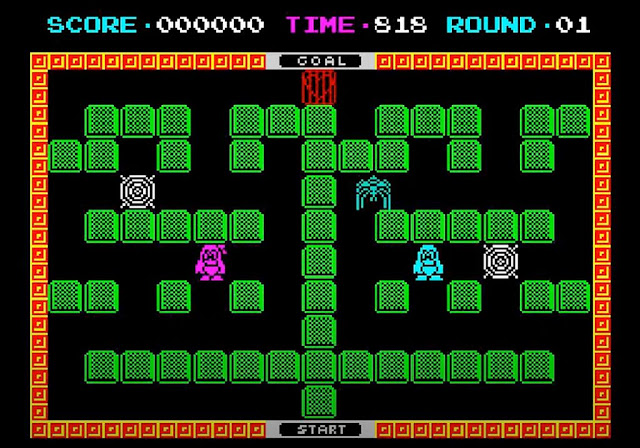 Here on Indie Retro News we love conversions, especially Arcade ones such as Rygar to the Amiga, or even the upcoming Bomb Jack Arcade to the C64. Binary Land to the ZX Spectrum is one such conversion we are here to mention, as thanks to Saberman letting us know on Facebook. We've been told that as of this month Joflof has converted the 1983/85 Binary Land over to the speccy; a game which was originally developed by Hudson Soft in 1983 for the MSX, FM-7, NEC PC-6001, NEC PC-8801, and in 1985 for the Famicom.


As noted by the website linked below. you play as two penguins at the same time but in a horizontally symmetrical way, with the objective of the game being to take them through the mazes avoiding obstacles and enemies until they came together to meet the end of the level. The game consists of 100 levels (although there are certain patterns that are repeated throughout them), and when you complete them the game starts again from scratch.... Be away the game isn't easy, with many elements taken from the NES version with graphics limitations of the spectrum, and the objective is to achieve the highest of scores.