I Have No Mouth, And I Must Scream reviewed by DarkwyndPT 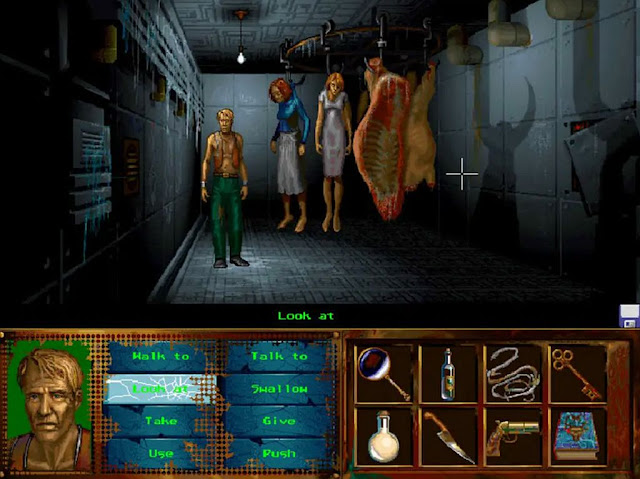 27 June 2018, renowned sci-fi writer Harlan Ellison passed away at the age of 84. Ellison is considered one of the most prolific and influential sci-fi writers of the 20th century and today we’re going to take a look at the video game adaptation of one of his most famous short-stories: I Have No Mouth, And I Must Scream.

I Have No Mouth, And I Must Scream is a graphic adventure developed by The Dreamers Guild and published by Cyberdreams and Acclaim. It was originally released in 1995 for DOS and Macintosh. In 2013, it was re-released by Night Dive Studios for Windows, Macintosh and Linux. And in 2016, it was again re-released for Android and iOS.

The original short-story was published in 1967 and it quickly became one of Ellison’s most famous works, winning several awards, including the Hugo Award. And Cyberdreams, famous for their adult-themed sci-fi, fantasy and horror games, decided to adapt Ellison’s short-story into a graphic adventure game. But unlike other video game adaptations, Ellison was actively involved from the start, from co-writing the game’s script to voice AM, the game’s main antagonist. 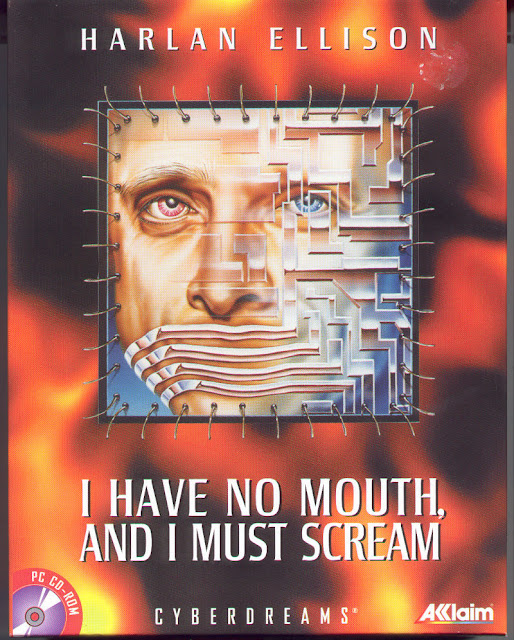 The original cover features a central image of Ellison himself with his mouth covered by what it looks like computer circuitry, hinting at the game’s plot. In some editions of the game, the central image was in fact a 3D mouse pad that was shipped along with the game. It’s a very eerie image that conveys oppression by technology, which is one of the game’s main themes.

But the re-released version brings a slightly different cover: 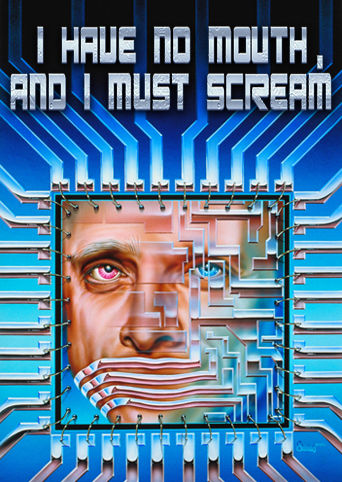 Now, this version expands upon the computer circuitry imagery, which I personally  adore! While the red and black background in the original cover might look more menacing, the blue highlights in this one makes it look more logical and cold, which still works within the game’s context.

But enough about imagery and let’s boot this sucker, shall we?


The game’s intro doesn’t show a lot of backstory, so reading the manual before playing the game is highly recommended. The backstory is basically this: an omnipotent computer called AM, after a nuclear apocalypse (which AM might have provoked), saves the last five humans from said apocalypse, but when reaching the height of his omnipotence, AM found a great hate for Humanity and for more than 100 years, dedicates itself in torturing the last humans, preventing their deaths by torture or even old age by granting them immortality.

AM then decides to put the humans through tests and scenarios, both for its own entertainment as well to prove to itself all the failings in human nature. And it’s here that the game starts, in which you have to choose between our five protagonists: Gorrister, a former trucker with guilt-ridden suicidal tendencies; Benny, a former soldier who was the most tortured by AM to the point of being modified into an ape-like creature; Ellen, a former computer engineer with an inexplicable phobia for the colour yellow; Nimdok, an extremely old German scientist and Ted, a paranoid and vain con artist. 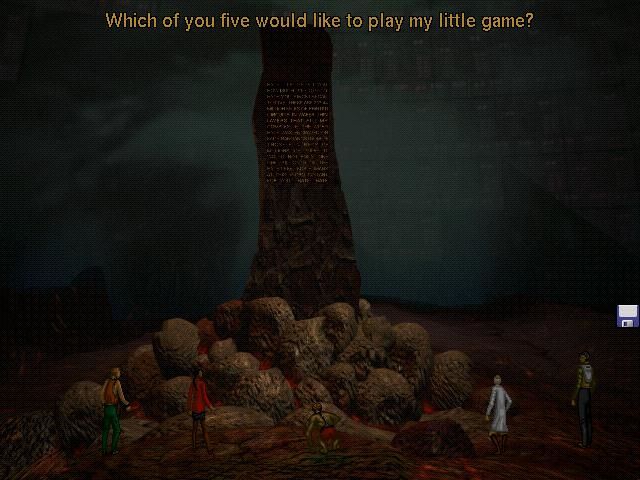 The beginning of the game.

After choosing your character, AM then sends him or her to a scenario where each character must find out the objective of said scenario and fulfill it to escape. However, they must also confront their past, their fears and their own shortcomings in order to succeed in their respective scenarios. However, there are different ways to solve the puzzles and each character has the option to follow their basic instincts or learn the human qualities that evaded their past lives in order to raise their karma level.

The karma level is measured by each character’s background colour in their respective portrait, located in the bottom-left corner of the screen. It ranges from black to white, going through several colours. It gets lighter for every “good” action and darker for every “bad” action, including reading each character’s Psych Profile, which provides clues to solve the puzzles. The reason for the karma level is only revealed during the final part of the game, but believe me, it helps to try and finish each scenario with the highest possible karma. 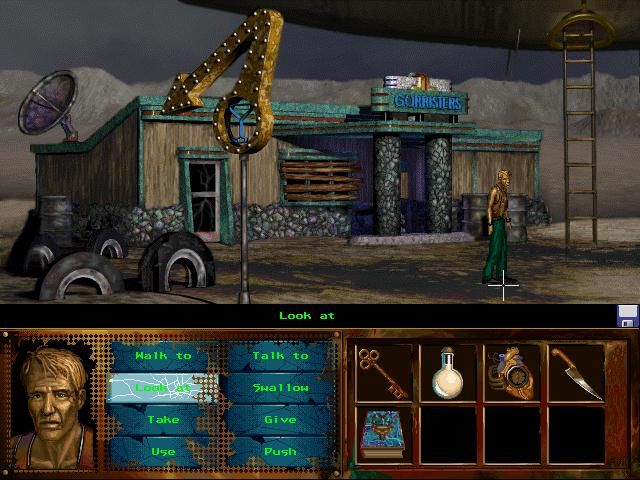 The screen is divided in two sections: the main section, where the action occurs and the bottom section, where the character portrait, the action menu and the inventory are located. The interface is very reminiscent of the SCUMM engine by Lucasarts, although it’s lacking some common action verbs, like “open” or “pull”. But you can use “use” for such actions.

The graphics are very detailed and quite good, although not very colourful (with some exceptions). But then again, in such a dark-themed game, a dark colour palette for most makes sense. The sprites are also quite detailed, albeit a bit small. The animation is equally good. The sound is great, be it the sound effects or the voice quality; although the voice acting ranges from great (Ellison’s AM is deliciously hammy!) to bad (I’m not a big fan of using actual children to voice kid characters); and the soundtrack, which is also quite good in providing a proper atmosphere.

The puzzles, however, can be quite hard (especially in the final part) with a lot of pixel-hunting and backtracking. In fact, for almost every puzzle solved, you need to backtrack to previous screens to look for new objects, situations or characters to interact in order to move the story along. I’m not ashamed to admit that I had to use a walkthrough several times, especially at the end, since reading the Psych Profile for clues lowers the karma level. 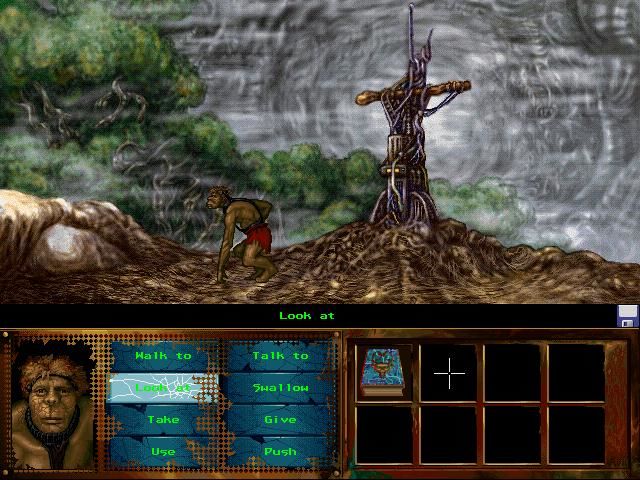 I wasn’t kidding when I said there was a lot of symbolism in this game!

But I do like the freedom given to the nature of your characters, because your karma level influences the type of ending you can get, ranging from terrible (the canon ending in the original short-story) to the best ending. All of this gives the game some replay value, something that’s quite rare in graphic adventures.

But for me, the best part of the game is the story and the characterisation. Due to the nature of graphic adventures, Ellison had the opportunity to expand all the characters’ backstories and the story’s themes, not just adding extra endings. The story is quite dark and bleak, exploring themes of human nature and condition, especially redemption, mixed with a lot of symbolism and ethical dilemmas. And apart from the best ending, the endings can also be very dark and depressive. You won’t find any comedy or humour whatsoever throughout the game (although the violence isn’t as gory as I expected). 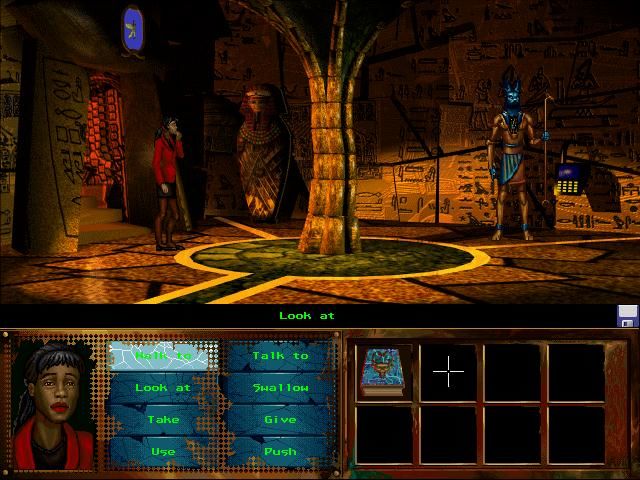 Also, the characters were substantially changed from the original short-story and given a deeper characterisation, making them really fleshed out when you find out their backstory. Of course, there was a little controversy when Benny’s backstory was also drastically changed, but there are still some hints of the original characterisation here and there when playing his scenario.

In conclusion, I Have No Mouth… isn’t a perfect graphic adventure from a puzzle solving perspective, but the premise, the story, the themes and the characters more than tip the balance to its favour. Regardless to say that I recommend it, although it might be hard for newcomers to the genre.

No, this isn’t King’s Quest, not even close…

I Have No Mouth… was very acclaimed by most critics, even winning some awards, but it sold poorly. Most of its success come in more recent years, becoming a cult classic and increasing Ellison’s fame as a writer, although he personally prefered to stick to writing short-stories, novellas and screenplays.

You can buy it here on GOG.com, here on Steam, here on Google Play or here on the Apple Store for iPhone and iPad. Both the GOG and Steam versions come bundled with the original short-story in PDF format and the game’s soundtrack.

So, I hope you’ve enjoyed this review dedicated to the memory of Harlan Ellison. Next time, we’ll take a look at a more upbeat game. Till then, be good and keep on playing.

Labels: Adventure, DarkwyndPT, GAMES, GAMING, I have no mouth and I must scream, MS-DOS, Retro Gaming, Retrogaming, REVIEW