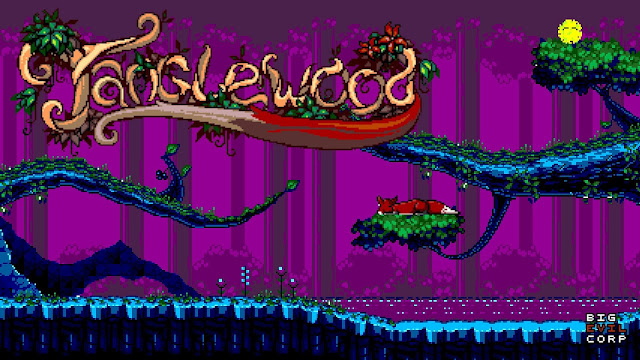 Finally after all this time and raising a respectable £54,830 during a Kickstarter campaign, the developers Big Evil Corporation have recently announced their retro puzzle-platforming game originally released for the SEGA Mega Drive and Genesis is now available via Steam for PC, MAC and Linux! Yes indeed ' TANGLEWOOD ' ; a game programmed in pure 68000 assembly language, using original development tools and processes from the 1990s is available for all to enjoy!

Set in a fictional world, the game follows a young creature, Nymn, who is separated from home after the twin suns set. Unable to get back to safety, Nymn must find a way to survive the night terrors and make it to morning. TANGLEWOOD’s world is a dangerous one after dark, and Nymn must use skills of evasion, special abilities, traps and trickery to defeat predators. The game features fast paced 2D platforming fun with puzzles, special abilities, tricks and traps, lovingly crafted characters, fluid animations, an original soundtrack by freezedream authored for the Mega Drive, time of day cycle influencing enemies, collectables and much much more as a real 16-bit game originally created for and playable on genuine SEGA consoles!