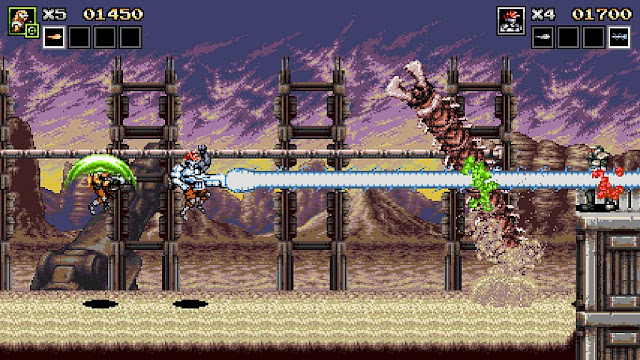 With Odallus: The Dark Call and Oniken under their belt, the developer JoyMasher are certainly no strangers to developing a varied selection of decent retro inspired games. But now it looks as if they are about to top all of them in quality, as they have once again mentioned their seriously cool looking Contra styled game of ' Blazing Chrome ', but this time the game has finally been released on Steam, GOG PS4, Xbox and Nintendo Switch much to the excitement of the Indie and Retro community!

In Blazing Chrome the world is under the machines domination, putting the few humans alive on the edge of total extermination. Bring your best pal and kick some metal asses to free the humankind. Featuring co-op shooting action, face paced combat, fully armoured vehicles, special weapons and even big Robots in mohawks, as the developer rightly says  "Between Contra and Metal Slug, Blazing Chrome is made by and for arcade and action fans "